It's a misty Wednesday afternoon and the pigs are hard at work. So is their porquero Juan Carlo, who's busy guiding them across this 1,700 acre farm to the land's choicest acorns. At sunrise, Juan Carlo rouses about 340 pigs from their farmhouse and sets them to work. At sundown he corrals them back to the ranch. This year marks his 25th on the job.
In a few weeks the pigs' work will be done: they'll be sufficiently fattened up from their grazing to be slaughtered, butchered, and turned into some of the most expensive ham in the world— jamon Iberico puro de bellota, acorn-fed pure breed Iberico ham. 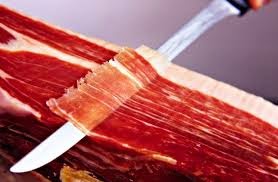 Acorn-fed jamon Iberico is intensely sweet. It's floral, earthy, and nutty like good Parmesan, with fat so soft it melts right in your mouth.
The dehesa around the Sierra de Montanchez is rich with holm and cork oak, cooled by the breezy Iberian climate, it is one of many across Spain and Portugal,   the pigs  have a joyful life but finally end in a small town called Montanchez where hams cure in jamoneras designed for the task. From start to finish, the ham-making process is simple: grant good pigs the freedom to be good pigs, let them feast on the land, then cure their flesh with little more than salt and air.
For most eaters, that's where the story begins and ends. But there's more to it—a process that blends unwavering tradition and modern technology to produce this sought-after ham. 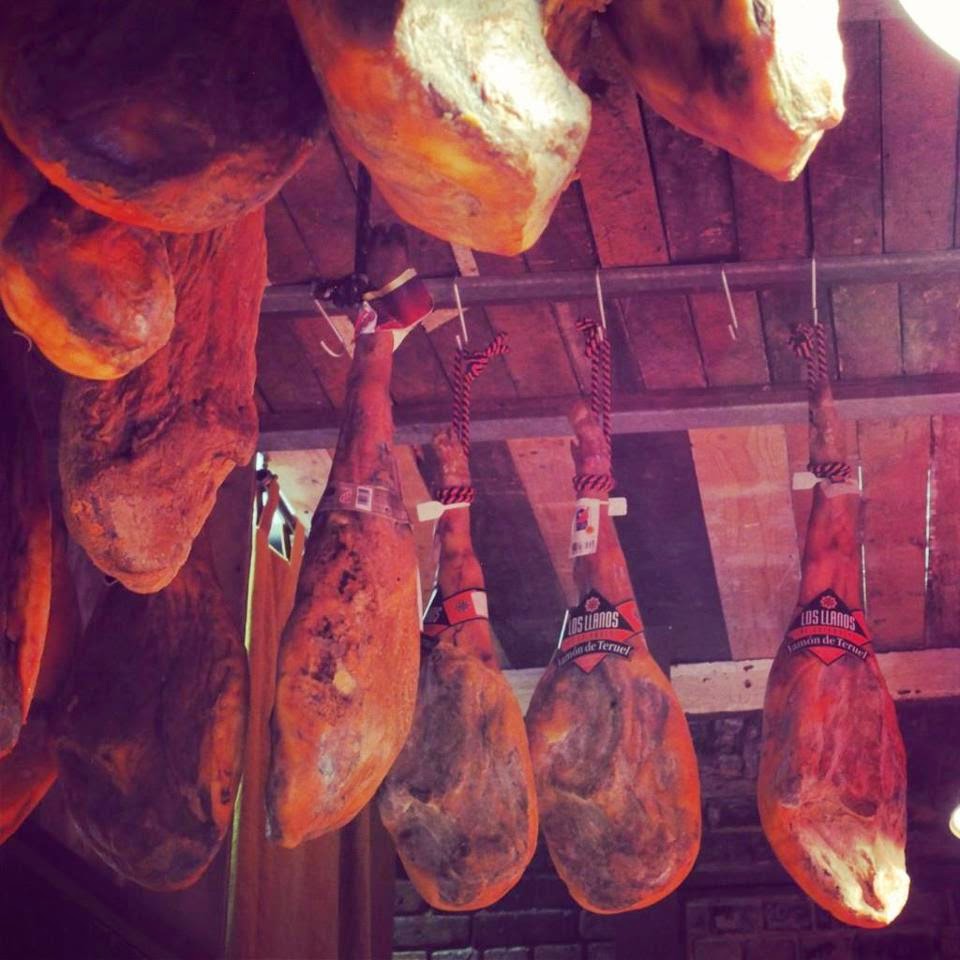 In the world of Spanish ham, there are two premium classifications: Iberico pigs and acorn-fed pigs. Unlike white pig breeds like Serrano, black-skinned Iberico pigs are descendants of the Mediterranean wild boar, and are colloquially called pata negra("black foot") for the hoof that accompanies each ham. They're athletic animals, runners and rooters, and thanks to the structure of their intramuscular fat, their meat is more flavorful, juicy, and distinctive.
Iberico pigs are expensive. They have smaller litters, yield less meat per head, and take time to mature, which is why many ham producers around Spain cross-bred them with other varieties. Up until recently, ham made from pigs that were as little as half-Iberico could be sold as jamon Iberico, but new legislation now requires Iberico ham to be labeled according to the percentage of the pigs' Iberian ancestry.

Then there's the acorns, the bellota, which fall from oak and cork trees from early October to early March on the farms where the pigs are raised. They're high in fat, a large percentage of which is unsaturated oleic fatty acid, and eating them is what makes the pigs' fat so soft and creamy, on the verge of melting at room temperature. Acorns also contribute to the ham's nutty flavor and aroma, as essential to the product as the meat itself. Of all commercially raised Iberico pigs, only 5% are both pure breed and acorn-fed.

Spanish ham culture has a vocabulary all its own. There are porqueros, not shepherds; pigs are "sacrificed," not slaughtered; and the farms where they're raised are calleddehesas. 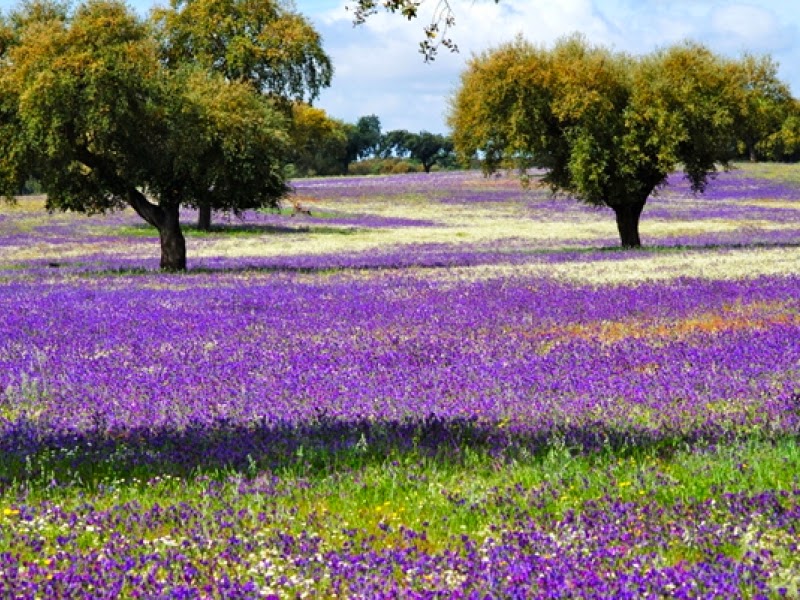 The dehesas are a national treasure: each one to two thousand acres of forest partially converted to pasture, often hundreds of years old, with rolling grassy hills amidst crops of acorn-producing oak and cork trees. Just as acorns are an essential ingredient to the ham, so too are the dehesas. These pigs need to run around all day, over the hills and through the woods, for their muscles to develop and for the ham to taste the way it does.

Over 18 to 24 months, the pigs will root around the dehesa, grazing on grass, mushrooms, bugs, herbs, whatever they can find. Come October all through March, the montanara, or acorn-dropping season begins, and the pigs march into action. Fatty acorns are the pigs' favorite food, and with a mandated five acres of dehesa per pig, there's plenty of room to look for them. By the pigs' second montanara, they'll have feasted enough to reach their kill weight, about 360 pounds.
Managing the pigs isn't just left to nature, inspectors pay anonymous visits every two to three weeks to check on their treatment and diet. They also sample the pigs' fat to analyze its oleic acid content—too little and the pigs won't meet quality standards, too much and they'll be impossible to cure into ham.

You may have heard that pigs are as smart or even smarter than dogs. On the dehesa they behave more like sheep dogs than sheep. Curious about newcomers, they'd inch closer and closer to me, some even posing nicely for the camera, before bolting away. Unlike livestock domesticated into complicity, these wild boar descendants stay smart. 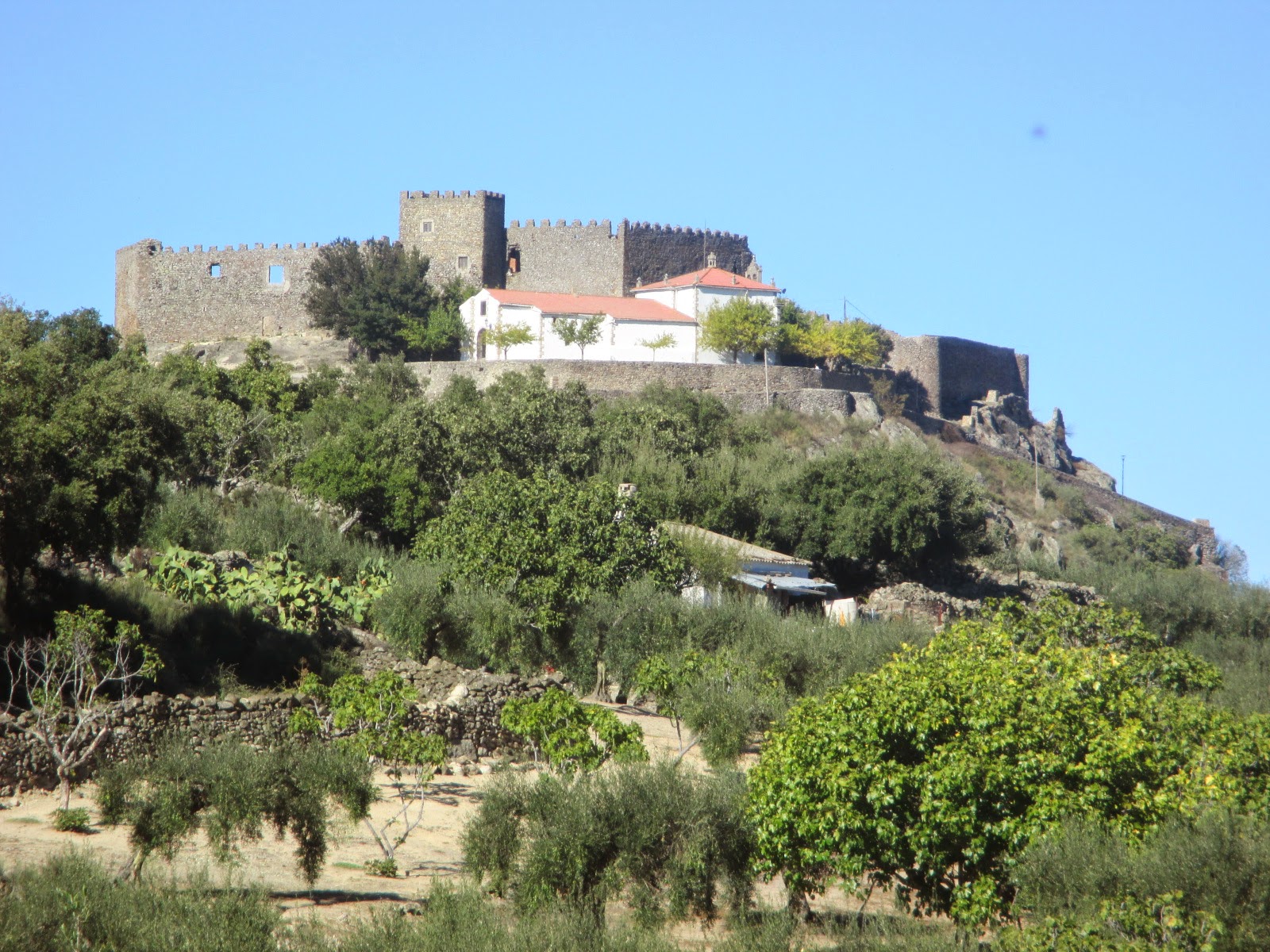 The curing tradition in Montanchez is centuries old:  you can still see hundreds of hooks on the ceilings of every old house from when ham was cured in the natural air flow.
Nowadays there are huge jamon drying barns, some climate controlled but many using the traditional methods. 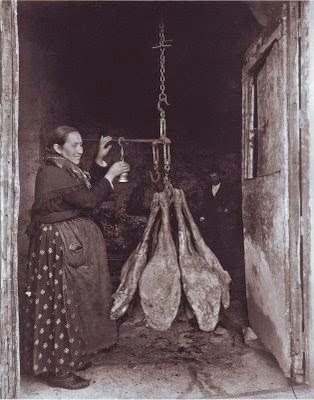 Before they get there, the pigs must be slaughtered. They're knocked out with CO2, and once a pig is deemed unconscious by a vet, a worker slits the artery along its throat until it bleeds out. Legs, loins, and shoulders go towards other products,  the remaining fresh meat is sold to restaurants. The ham-bound legs are then skinned, salted, rinsed, dried, and sent to the curing cellar, where they'll remain for about a year and a half. 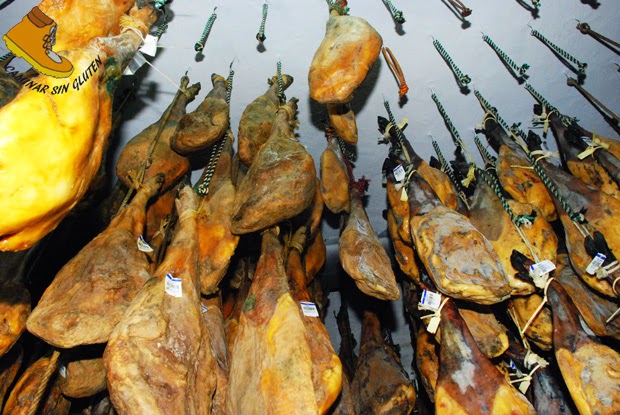 Step into a jamon bodega and you're slapped with an aroma that's something like rising bread, aged cheese, and your deli's cured meat display—multiplied by the 40,000-odd hams inside.
Thick brick walls, a breezy, hilly climate, and a stable population of ham-friendly microorganisms are most of what the meat needs to finish its journey into ham. Skilled specialists monitor the cellars at all times, noting fluctuations in temperature and humidity, but their adjustments are amusingly low-tech. Need to change the temperature? Open or close a window. Air too dry? Spill some water on the floor.
It's more complicated than that, of course—hams too close to a window may get moved if they dry out too quickly, and the legs are regularly rubbed down with oil to prevent insects from taking up residence.
Before any ham leaves the cellar, it gets a sniff test. A trained nose can purportedly detect 100 aromas from a premium ham, some sweet, some meaty, some nutty. Different regions of Spain have their own hammy terroir, and even different cuts of the same leg bear unique aromas.

With a short, stubby needle called a cala, the ham sniffer pokes down to the bone, quickly takes a whiff, and covers the breach with a smear of fat. There's just a second or two to detect the balance of sweet, earthy, fermented, and floral aromas that signal a well-cured ham, and only a ham that passes the sniff test in four inspection sites makes its way out the door. If anything goes wrong, the nose knows.
From there the ham moves on to a grateful world, though in truth many whole hams have already been spoken for by bars, restaurants, and large-scale clients that reserve them while they're still aging. Jamon Iberico shouldn't be sliced by machine—the soft fat would sheer out and the lean, bony legs make horizontal slicing difficult. 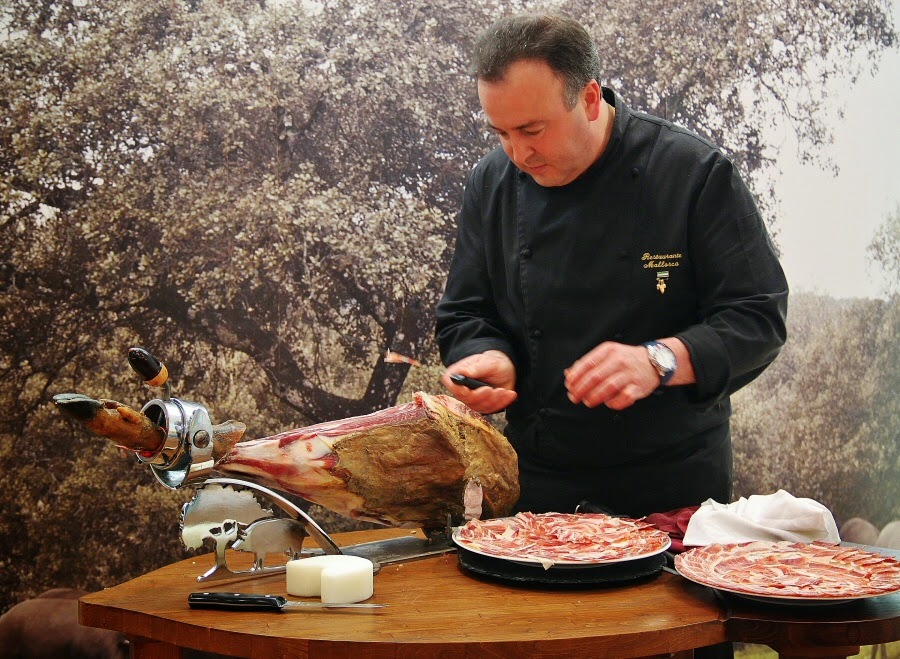 Like cutting fish for sushi in Japan, carving Spanish ham is an artisan job of its own. The perfect slice is nearly see-through, small enough to eat in one bite, and carved at a level angle to get the most consistent and efficient slices from the ham as possible.
Remember how expert ham sniffers can detect four different aromas from the same ham? You may not be able to pick up on all the nuances, but it's easy to see that different cuts of ham look and feel different, from the maza's clean striations of fat to the ribeye-like marbling of punta—or the hard-to-reach "butcher's cut" of the ham, the chewy, flavor-packed cana near the hoof. A skilled carver knows how to make the most of them all, mixing up a plate of ham with multiple cuts for contrast. 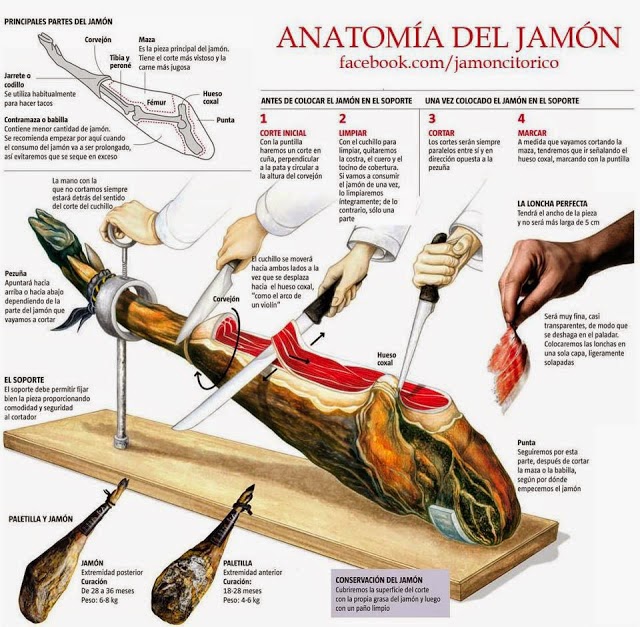 Which brings us back to where we started: why does good jamon Iberico cost so much? It's more than the expensive pigs, spacious farmland, or acorn-rich diet. It's more than the time and investment needed to prepare and cure hams properly, or the laboratory science and quality control behind the scenes.
In Montanchez there are many jamon shops and bars where you can sample the sublime product such as Casa Bautista, one of the oldest. 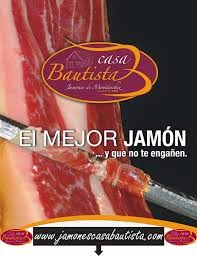 At the end of the day the question comes down to scale—how much can you produce when every step along the way is so labor-intensive? What substitute is there for highly trained specialists who in some cases are born into the job?


Good pigs need time. And as with plenty of other luxury goods, there's a choice to do something fast or to do it right. Fortunately for us (and the pigs), there are still some people more interested in the latter.

Posted by extremadura and beyond at 12:22 AM